Ek Balam is the ancient Mayan ruin site that is translated as “The Black Jaguar” from the Mayan language. While Ek Balam is not the most famous place among other Mayan ruins in Mexico’s Yucatan Peninsula, a trip here is a must for anybody who wants to experience a more tranquil and less crowded place in the middle of the lush jungle.

In this post, I’m going to tell you why you should put Ek Balam on your itinerary if you travel around Mexico’s Yucatan Peninsula.

Check my tips for visiting Mexico head of your trip!

The most important period of Ek Balam’s history was between 770 AD and 840 AD when art and architecture flourished here. But after 840 AD, the population of Ek Balam started to decline, and the city collapsed soon after that. While reasons for this rapid change are still unknown, scientists have several theories.

Like many other Mayan ruins, Ek Balam became covered by jungle when it was abandoned. Scientists discovered Ek Balam ruins only in the late 1980s, when the extensive excavation work was conducted at the site.

Today Ek Balam is home to some of the most important architecture of Mayan civilization.

Take a tour of Ek Balam

Ek Balam is not a big place, and while you can tour it on your own, I recommend taking a guided Ek Balam tour to learn the history of this incredible place. You could buy a tour on the spot when you arrive or book it online ahead of time.

Ek Balam sits just over 30 miles of the world-famous Chicken Itza, and about 16 miles away from Valladolid, one of Pueblos Magicos in Yucatan. However, only a fraction of tourists come it to Ek Balam which makes it for a perfect trip if you are looking for a less discovered place.

Ek Balam is an excellent place not only because it’s off-the-beaten track, but also because you can climb its main pyramid, the main structure of this archaeological complex that is about 500 feet long and 200 feet wide. One of the biggest constructions excavated in the Yucatan Peninsula, it features a lot of well-preserved intricate details as well as statues and frescoes.

PRO TIP: While you should bring your camera to snap some photos during your visit to Ek Balam, make sure to leave your drone at home. Drones are prohibited at Ek Balam, just like at other Mayan ruins in Mexico.

Just before you walk into the site, you will find an arch connecting this ancient city with sacbe (or white route) that served as a transportation route between many Mayan kingdoms (For example, Chichen Itza and Ek Balam were connected). The arch is located at the intersection of several sacbes at the entrance of the city.

FUN FACT: As with many other Mayan cities, sacbes in Ek Balam begin from the center of the city and go in four directions.

The center of the city was surrounded by walls and contained about 45 buildings, the remains of which you see to this day.

Ek Balam is made of several temples, the pyramid that is called El Torre, and two big palaces. While the original Ek Balam covered about 12 square kilometers, only one square kilometer is open to visitors.

The most prominent feature of Ek Balam is the large tower called El Torre located in the center of the city. One of the biggest pyramids in the entire Yucatan peninsula, El Torre reaches 100 feet and boasts some of the most amazing designs that are found in the Yucatan Peninsula.

The tower is also home to the tomb of Ukil-Kan-Lek-Tok, who ruled Ek Balam around 800 A.D.

When you get to the top, you can enjoy the incredible view of the entire Ek Balam site and the surrounding jungle. The stairs to the top are pretty steep, and if you are scared of the heights, consider going with someone else.

Several parts of Ek Balam, including El Torre boast impressive wall paintings. The most important of them is the “Mural of 96 Glyphs”that shows scenes from Mayan mythology.

Another prominent spot of Ek Balam that can also be found at other ancient Mayan sites such as Chichen Itza is the huge ball court that was located within the limits of the city and used by Mayans to play a game with a ball.

The black jaguar is one of the most important symbols of the Mayan culture.

How To Get To Ek Balam

Ek Balam is located about 40 miles north of Valladolid and is just a short distance away from another popular tourist spot, Rio Lagartos which is known for its amazing wildlife such as flamingoes.

It’s a great spot along your Yucatan itinerary, and when you go there, don’t forget to stop at Uayma, a small village with a beautiful church just about 10 millimeters away from Valladolid.

The fastest way to get to Ek Balam is to rent a car, however, you can also get there by bus from Valladolid. However, you can also take a small bus (or Colectivo) that departs from the area near Hotel Zaci in Valladolid. Remember that it’s better to leave early morning, as you will avoid the afternoon heat and will have more space on the bus.

Not many people know this, but there’s a cenote right near Ek Balam! To get here, you have to pay a separate fee and rent a bike, as the cenote is about 2 kilometers away from the entrance to Ek Balam.

It might seem long, but the bike ride goes by pretty quickly, you pedal through the beautiful jungle. And if you come early enough as I did, you might even have the entire cenote all to yourself. You can also walk to the cenote, which will take you a bit longer.

The swim in this cenote is a perfect refresher after exploring cenote, so I highly recommend it.

What to Wear in Ek Balam

If you plan on visiting Ek Balam, I recommend wearing light, comfortable clothing, and comfortable shoes. I also recommend bringing a bottle of water and putting on enough sunscreen.

Ek Balam is open from 8 a.m. to 5 p.m. The entrance costs 420 pesos and has to be paid in cash. Many Mayan sites don’t accept credit cards, so you should always carry cash.

When you enter the site, you will pass souvenir vendors who sell locally made crafts and arts. It’s a perfect place to grab an authentic Mayan gift for your friends and family!

What’s nice is that unlike other ruins such as Coba or Chichen Itza, parking is free at Ek Balam.

Also, you are not allowed to bring food or alcohol to the site.

I hope you enjoy your trip to this incredible site! 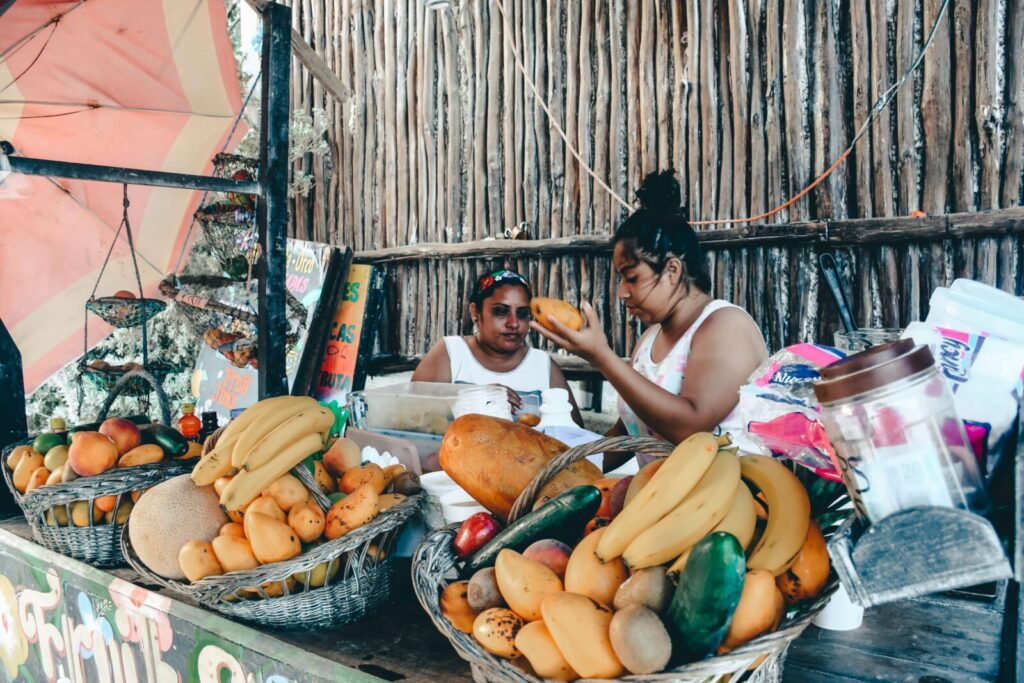 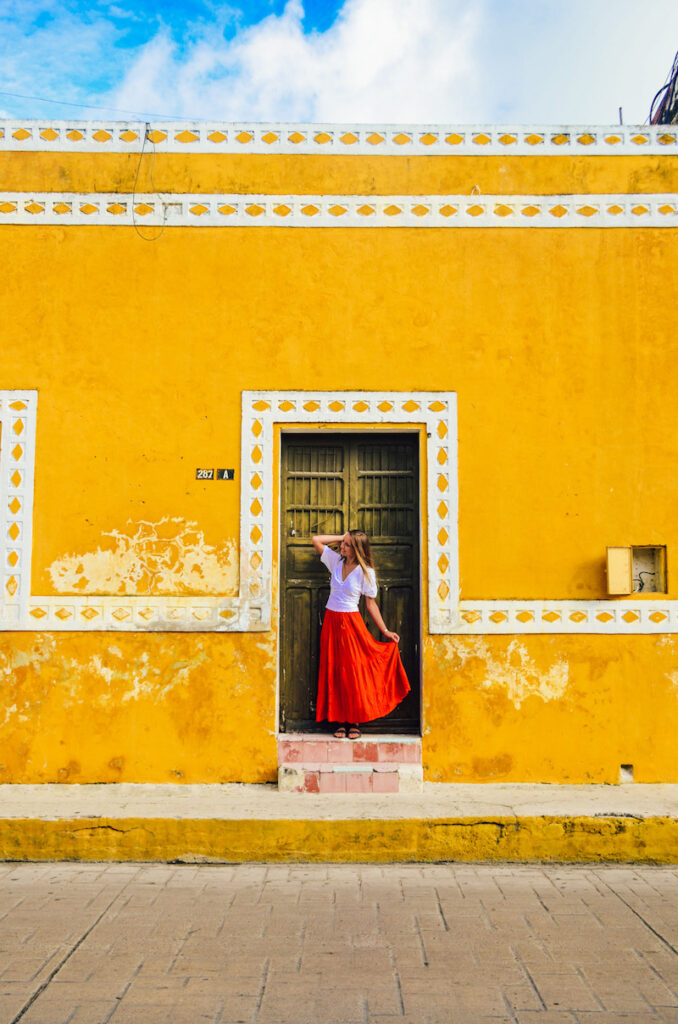 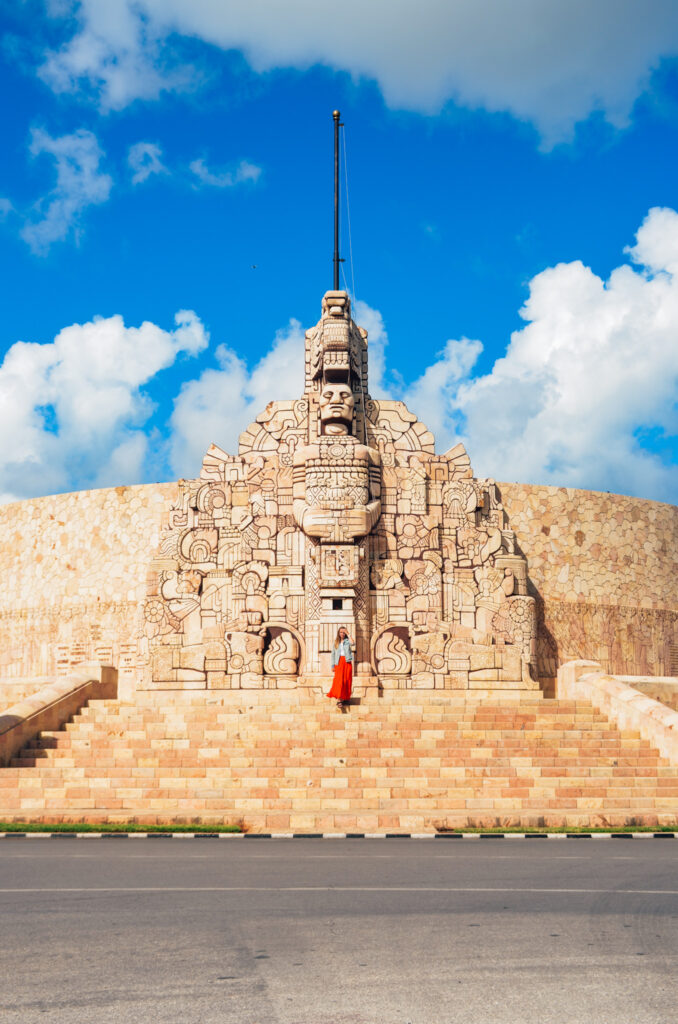 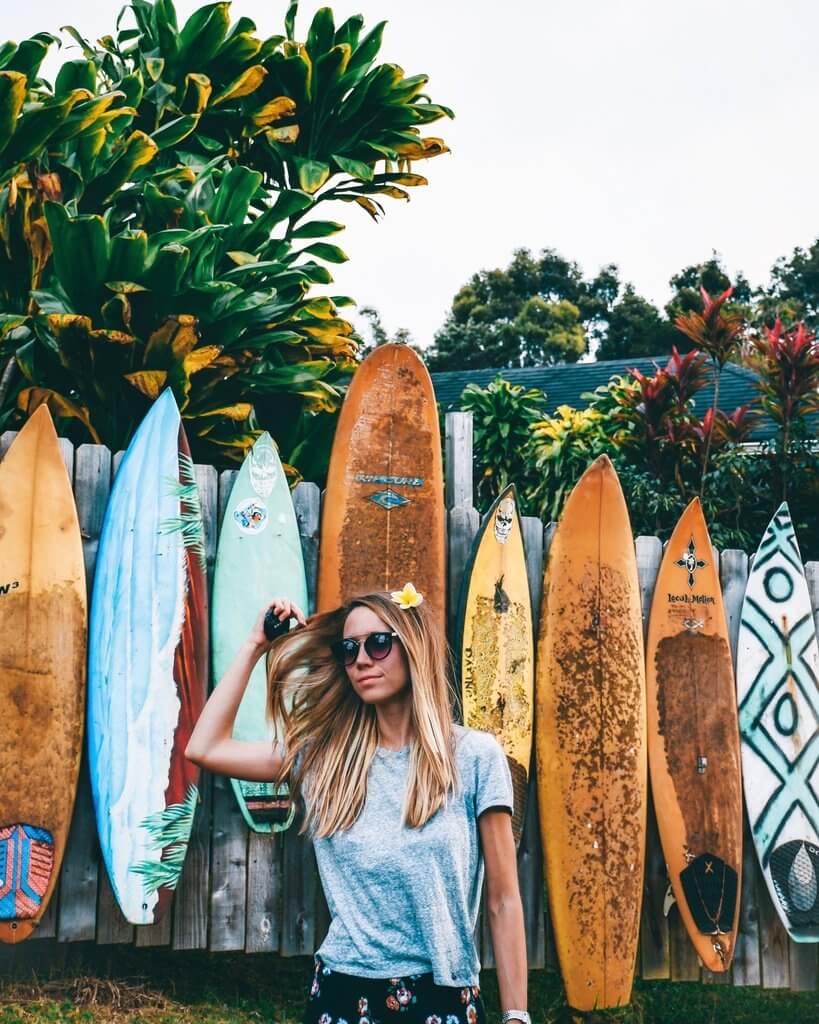